This manual is designed to help you learn everything you need to know about the individual components of the suSSHi Suite. In addition, we want to provide some configuration examples for target servers, common SSH clients and other tools, that use SSH as a secure protocol.

We do our best to keep these pages up to date and complete, but we are still working on the further development of the site, so it is worth visiting from time to time.

To better understand what suSSHi is used for, first let’s look at the SSH protocol.

SSH is a protocol, not a product. The Secure Shell (SSH) protocol is a specification of how to conduct secure communication over a network. It covers authentication, encryption, and the integrity of data transmitted over a network, as shown in the diagram below.

SSH is the de facto standard for accessing servers, network devices and a number of services like Git in a secure and reliable way over the network. OpenSSH is one of the most popular and widely used SSH server and client implementation of this genre, but there are many others available as open source software or commercial products. 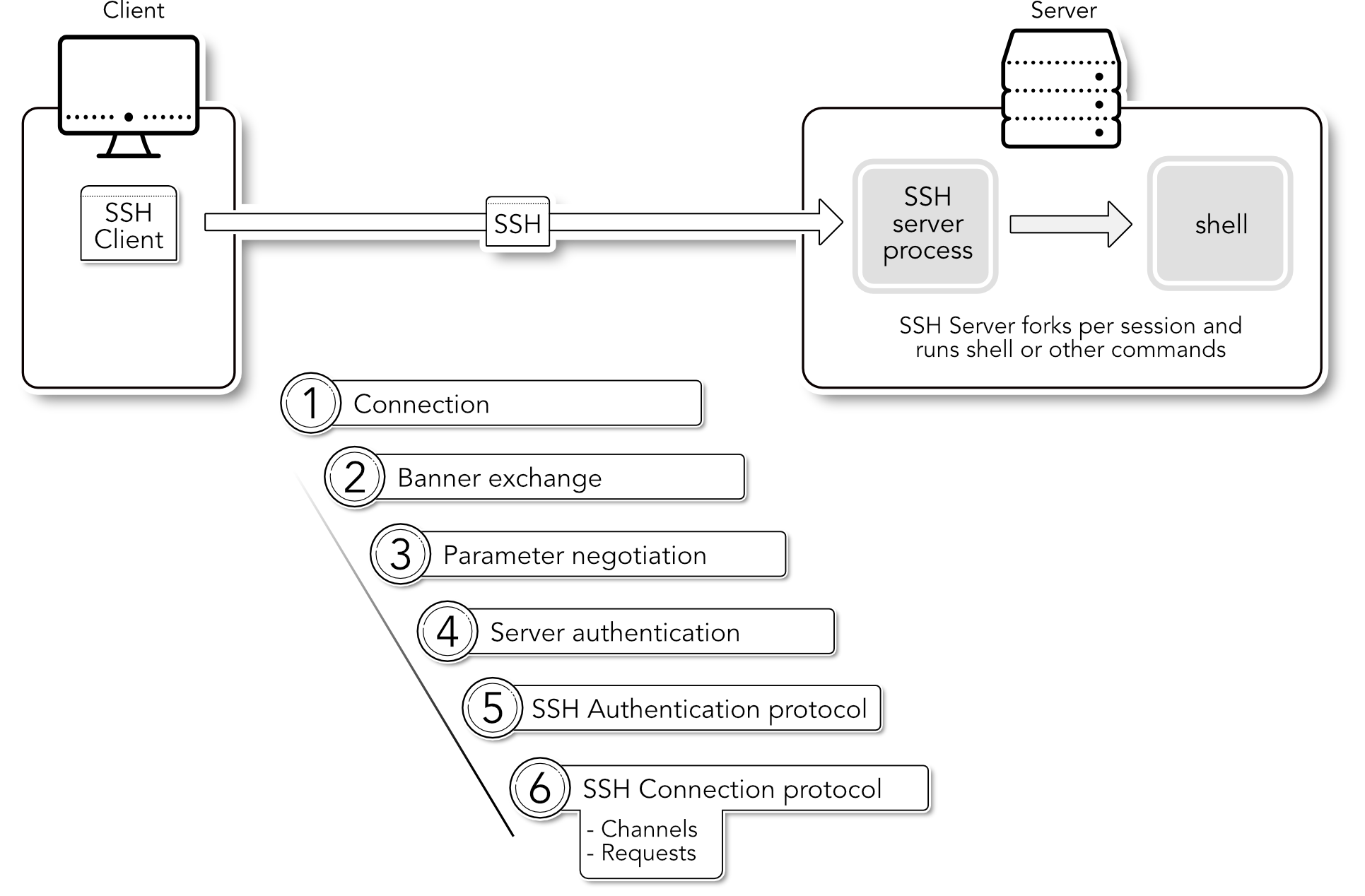 Modern SSH servers and clients such as OpenSSH Version 7.x and higher, no longer support the older SSH1 protocol, which in many respects has long been obsolete. For this reason, suSSHi only supports the current SSH2 protocol, which is documented in various RFCs and thus represents an Internet protocol standard.

See Compatibility for references to RFC standards that describe the SSH protocol.

We won’t cover all the basics about SSH - there are many sources available on the Internet - but we will focus on the steps and actions that happen during an SSH session to connect with an SSH client to an SSH server. Basically, an SSH server is a server process running on the (target) server system a user wants to connect to, in order to execute some commands or copy files, and so on.

We now simply assume that we have a correctly configured SSH server process running on a target system on TCP port 22 and that a common SSH client is used on the client.

suSSHi operates as a so-called non-transparent proxy or gateway between the SSH client and an SSH server, i.e. the servers are protected by suSSHi by preventing direct access, e.g. by a network or host-based firewall or a corresponding host configuration.

By placing the suSSHi Gateway so that the user can reach it via SSH, and the suSSHi Gateway in turn can reach the target servers, an secure access control system for SSH connections can be implemented. This provides a lot of additional security, monitoring capabilities and centralized access control for secure communication between clients and servers in all SSH phases.

With standard SSH implementations like OpenSSH, you have to configure all the access control, user mappings, etc. on each target, and controlling what a client is allowed to do on the server quickly becomes a nightmare.